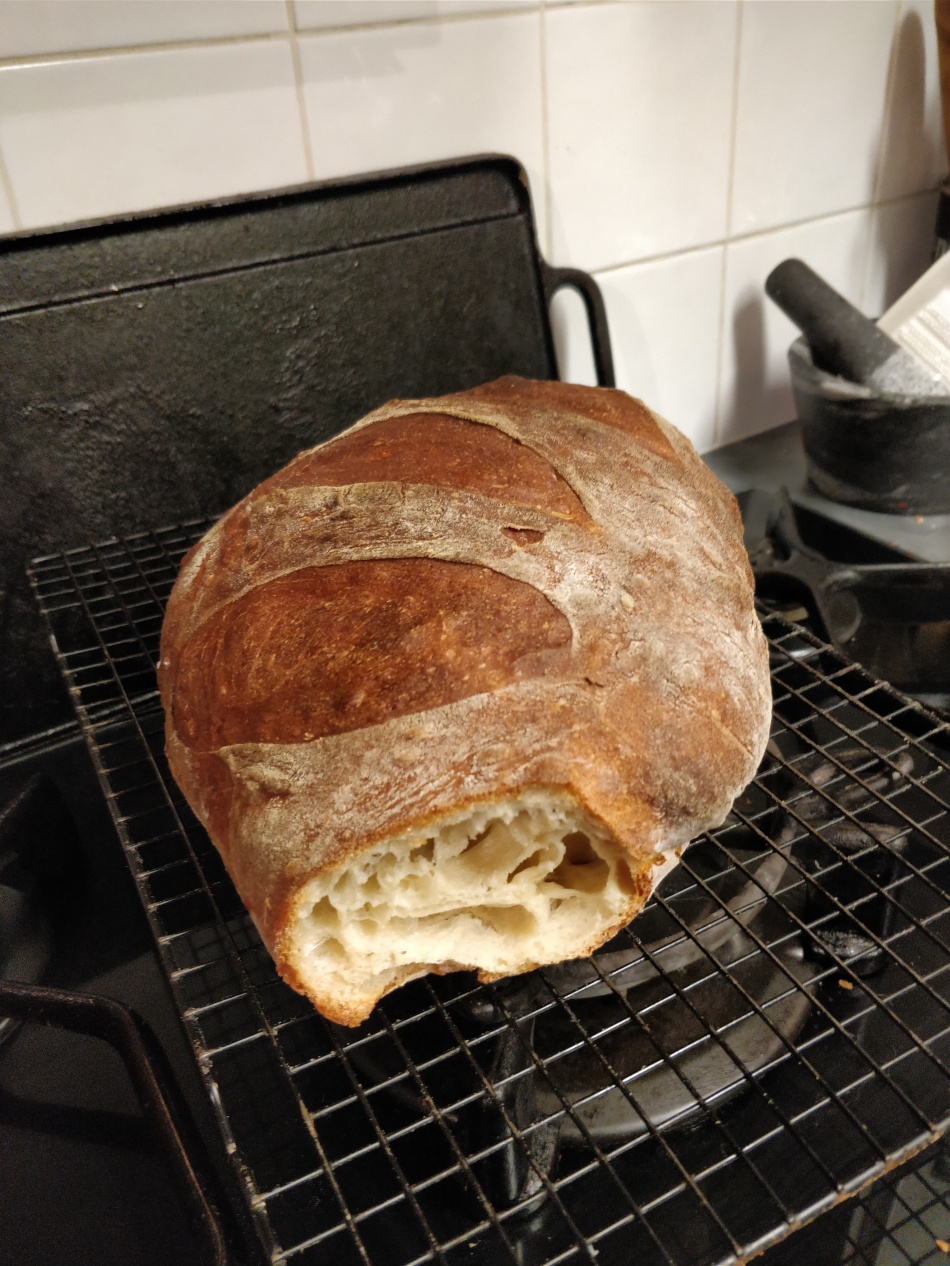 When I was growing up my dad liked to bake bread.  He would go to our local health food shop and buy the most ‘natural’ flour he could, together with very smelly fresh yeast.  Being a scientist he would mix the yeast with tepid water with precision, using a thermometer, and then pound it for what seemed like hours.  It always smelled wonderful but mostly came out with the density of a brick – sorry daddy!

Later on in life he tried it again with much more success.  Maybe he had loosened up a bit on the technique and measuring or maybe the yeast and flour were just better quality.

I first got in to baking bread when I was given a book by the amazing Richard Bertinet – how I would love to do one of his workshops. I began to understand what a poolish was (not quite a sourdough starter but in the early stages of fermentation) and how it changed the flavour and texture of bread. I love the process of kneading the dough, waiting for it to rise, forming the loaf – it’s just so satisfying to make this moth basic of foodstuffs really well.

A couple of years ago I was admiring  Fyberspates Jeni’s pictures of her sourdough and panettone on Facebook.  She gave me some very sage advice and I was off again.  I managed to get my sourdough starter to develop a rich, fruity smell rather than something that smells of sick.  I learned how to bake bread in an enamel roasting tin to help it to rise. I learned so much about technique.

Recently I just haven’t been satisfied with my bread.  I am happy to blame it on my aging oven, not having enough steam, old yeast, anything I can – what a bad workman I am. Don’t get me wrong, it tastes perfectly fine but it just isn’t special enough.  I know I can do better.

I told you in January that I have taken out an unlimited subscription with Craftsy and I was going to take a new class each month.  As well as all the fibre crafts you would expect, they have some wonderful baking workshops online, so I decided to go back to basics.  The class I took was called The Bakers Guide to French Bread and is presented by  master baker Jerffrey Hamelman.  When he explained about baker’s maths I almost whooped.  This is my kind of baker and it all made such sense to me

I followed his Batard instructions and this is what I achieved on my first attempt.  Look at the air in this loaf.  Look at the beautiful colour of the crust.  Look how it has risen.  I am so happy.

My family gave me a new bread book, a new loaf tin, some new scrapers and a pizza stone for baking loaves on for my birthday last week so I am going to enjoy spending time with dough this week.

It just goes to show that sometimes you need to strip away what you think you know, deconstruct you skills and start again.

3 comments on “On Bread”